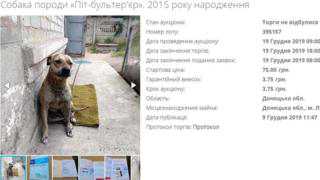 Image copyright SETAM Image caption This dog has been put up for auction with a starting price of 75 hryvnia (£2.30; €2.50)

Thoroughbred dogs that were confiscated under a court order in Ukraine to pay for their owners' debts have been put up for auction online.

The auction, highlighted by an opposition MP, has drawn criticism.

Many initially thought it was a joke when two dogs were put up for auction on a state-owned online site for confiscated goods.

But it soon became clear the dogs were real. One has not yet been sold but one has a potential buyer.

Opposition MP Mykhailo Volynets posted screengrabs of the two elite dogs, complaining that they were being used as bargaining chips. The starting price for one, a shepherd dog, was €44 (£40; $48), the other far less.

There was indignation on social media, and one opposition MP, Oleksiy Honcharenko, said bailiffs should not be seizing innocent dogs.

"We really have to confiscate pets from their owners," Justice Minister Denis Malyuska told BBC Ukrainian. "Even though they are taken because of their former owners' insolvency, often it turns out for the best when pets have been badly treated."

Daily life for many Ukrainians is expensive, with pensions failing to keep pace with the steep rises in gas bills in recent years. Earlier this year, an MP in the ruling party of President Volodymyr Zelensky apologised after advising one struggling pensioner to sell her dog.

Paying off an owner's debts was just one reason dogs were confiscated, Mr Malyuska said. Some dogs were removed if they had bitten people on the street or because a court ruled they should be given to another owner for better care.

Confiscated pets were often bought back by the owner or their relatives for a symbolic sum, the minister said.

Mr Malyuska suggested online dog auctions could be brought to an end, adding that he would buy one of the confiscated dogs himself.